Three weeks ago my MacBook Pro started behaving weird. All of a sudden its LCD screen would turned off. After that, simple rebooting would never work from the first attempt, and sometimes it wouldn’t work at all unless it sat still for several hours. This reminded me of my first used car – I never knew if the engine would start or not.

After leaving my MacBook in the Genius Bar at thee Apple store overnight for some serious diagnostic tests, I got a message that the logicboard in my computer had to be replaced. I never buy this expensive $350 AppleCare 3-year protection plan (I’m cheap, remember?). I take my chances.

The term logicboard means motherboard. A friendly guy form the Genius Bar told me that if I’d be replacing it in Apple store, it would cost me $500. But if they’ll send to to Apple’s repair depot, they’ll replace it as a flat fee job for $310 and in 3-5 business days I’d get it back. Done deal, just do it.

After ten days passed, I called the Apple store – they didn’t have any dates for me. Called to Apple support – they told me that some part is in back order and they would try to expedite (I had to use a couple of strong arguments during this call).

Next day, I got a call from Apple depot – they’ve replaced the logic board, but the problem was not fixed. I was given a choice – either let them continue trying to find the problem or get from them a refurbished computer with the same technical parameters. I picked the latter. The guy started to browse his database trying to find the same model of the same year. He found one, but their HD was 5400 RPM, while mine was 7200. I rejected. Then he offered me a newer 2012 model with 500Gb SSD instead of HD. I’ve agreed as long as all this goodness would fit into the same $310 repair deal. Yes, it would. I paid, and two days later the refurbished computer arrived.

Can life be all that rosy? There should be something wrong here, right? Wrong is the wrong word here. Let’s use the word “surprising”. I wanted to recover all my data from the external drive (in Apple’s world it’s called time machine). WAT? There is no firewire jack in this computer. Having two thunderbolt jacks is nice but… OK, went to the store and bought a firewire-thunderbolt adapter.

Then I took my network wire (it would give me a connection that was twice as fast than my wifi). WAT? There is no jack in this notebook for a network wire. Can you believe this? My first thought was to find an adapter for this cable too, but then I tested the speed of my new MacBook Pro – it was the same as my hard wire would give me in the past. On the photo, the new computer is on the right, and the old one (2008 edition) i on the left. They both go through the same WiFi router. 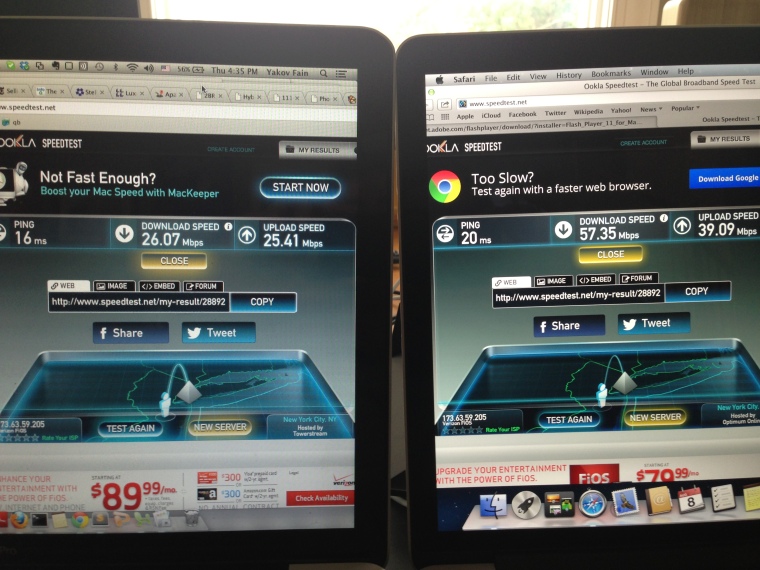 BTW, where is the slot for my DVD drive? None. Nada. OK, can live without it. Next. In the old MacBook I was getting an electric power from my 24″ Apple Cinema monitor. No good. They changed the power connector too to fit in the slimmer body. I can understand this.

The final surprise (at least I hope so) is that they’ve removed that line-in input. WHY? It was really small! Now there is only one headphone jack, which is a problem for me. I’m recording audio podcasts and screencasts using a professional microphone (Sure 7B) that goes into the voice processor (Aphex 230) that was connected to my old MacBook through the line-in jack via an optical cable. Now I need to buy some audio interface or adapter to route the sound via the USB port. OK, ok, I will. Despise all these little glitches, I consider this experience with Apple repair service as positive. Would you agree?

P.S. One more, I get a feeling that Google Chrome doesn’t really know how to properly maximize itself on the retina display. Am I just being a grumpy old man?

P.S.S. This new computer comes with a one year warranty from Apple, yay!