Last week I was participating in JEEConf – a Java conference in Kiev, Ukraine. It was the fourth annual conference attended by 700 people despite of the unrest on some of the Ukrainian regions. Kiev was quiet, peaceful and nice looking though.

A day before the conference I’ve delivered a presentation at the National Technical University of Ukraine (aka KPI). Only about a hundred of 50 thousands NTUU students were interested to learn about the new features of Java 8. No hard feelings guys. Let’s make it two hundred next year. 🙂

The next morning I’ve delivered the same presentation to at least 400 people at the conference, and in the afternoon I ran two consecutive sessions on HTML5 development for about 150 attendees. I’ve included   all these numbers here to draw the attention of the international speakers. Guys, you’re welcomed in Ukraine. There were many international speakers from all over the world this year too. The technical level of the conference is really good.

Due to political reasons the local currency (hryvna) is inexpensive for foreigners, but Kiev offers lots of nice places for sightseeing, has good restaurants, and night clubs. Here’s a photo of one of my dinners there (borshch, salo, vodka, and more): 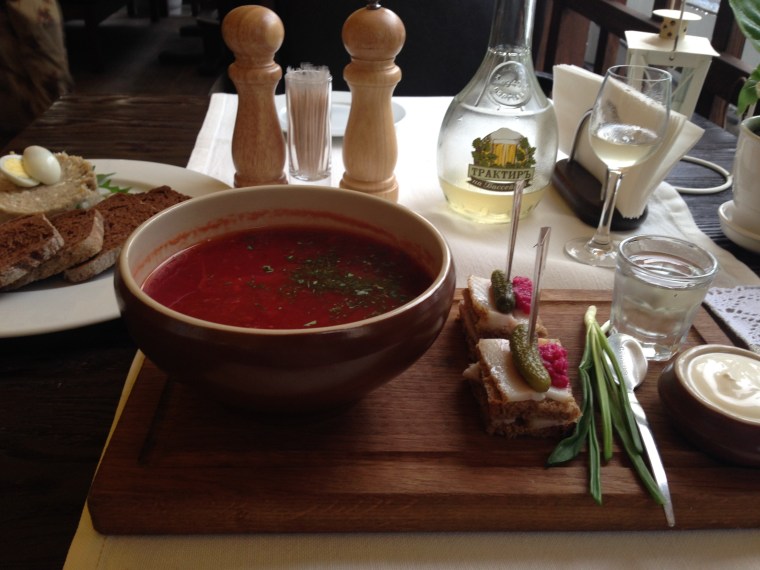 This was my third consecutive visit to JEEConf, and the conference organizers promised not only to add a large cake to their whiskey party, which is a good reason for me to attend this conference next year!

The photos from Kiev’s conference are here and here. A nice looking guy in black FARATA t-shirt is me.

In June I’m attending the Internet of Things Expo in New York City – I’ll be presenting an approach of integrating little “things” into Java enterprise applications. I’ll be using one of the insurance business workflows. Our team builds software for insurance agents (http://www.surancebay.com), and introducing Internet-powered small devices opens lots of interesting opportunities for us.

In August I’ll be participating in a small unconference in Greece titled JCrete. In the unlikely event you haven’t heard about JCrete, watch this short video.

End of September is the JavaOne time, and Oracle kindly offered free conference passes to Java Champions. I’ve submitted a talk proposal there too. But I’m planning to attend JavaOne even if my talk won’t be accepted. Java is stronger than ever, but having yet another reassurance never hurts.

That’s all, folks. Back to work.

One thought on “Back From Ukraine”